Written by Juliet Vickery, Head of International Conservation Science, RSPB about her new paper published in the Journal of Applied Ecology.

Existing in a world ‘on pause’ under the covid19 pandemic has certainly heightened awareness of the extent to which our use, and misuse, of the world around us can have devastating effects on our own wellbeing. But, whilst we talk of the value of nature-based solutions for things like, locking up carbon, providing clean water and improving mental health, demonstrating tangible and immediate benefits of conservation for people is challenging.

So-called ‘win-win’ scenarios, where conserving biodiversity will also directly benefit people, remain hard to find. Our new study in the Shea parklands of Burkina Faso, however, does just that. We show how increasing semi- natural habitats in these parklands boosts insect communities, important in itself, but also because these insects provide prey for resident and migrant birds and, crucially, many of them are important pollinators of Shea. Boosting pollinator numbers enhances Shea yield and Shea is a hugely important source of income for local communities.

The Shea tree (Vitellaria paradoxa) grows naturally in the dry savannah belt of West and South from Senegal in the west to Sudan in the east, occurring in 19 countries across the African continent and over an estimated 1 million km2. The nuts are processed into a nutritious butter that helps sustain an around 80 million people, as well as providing an income from local and global trade. Shea butter has many uses, in the West it is used in soap and cosmetics and, increasingly, in food like chocolate. Locally it used extensively as major source of dietary fat and in medicines.

The shea parklands themselves are a long-established and traditional food and fuel wood production systems. However, as local population pressure grows and as mechanisation progresses, management has moved away from a shifting cultivation and pastoralism to more intensive ‘permanent’ agriculture. This has resulted in a loss of fallow land and contributed to a degraded and fragmented landscape making it increasingly hard for biodiversity and people to ‘eak out an existence’.

To try to understand if the system could be improved for both people and wildlife a young researcher, Dr. Aoife Delaney, based at RSPB and Trinity College Dublin, spent many months living and working in a study site in the Centre-Sud region of Burkina Faso. Working with local partners and the local community she carried out intensive observations of pollinator activity on Shea trees, and performed elegantly simple experiments to assess whether, and if so by how much, Shea was pollination-limited. These experiments involved hand pollinating some flowers, using a small brush to dust them with pollen from other trees, and then comparing fruit set from these flowers with naturally pollinated flowers. 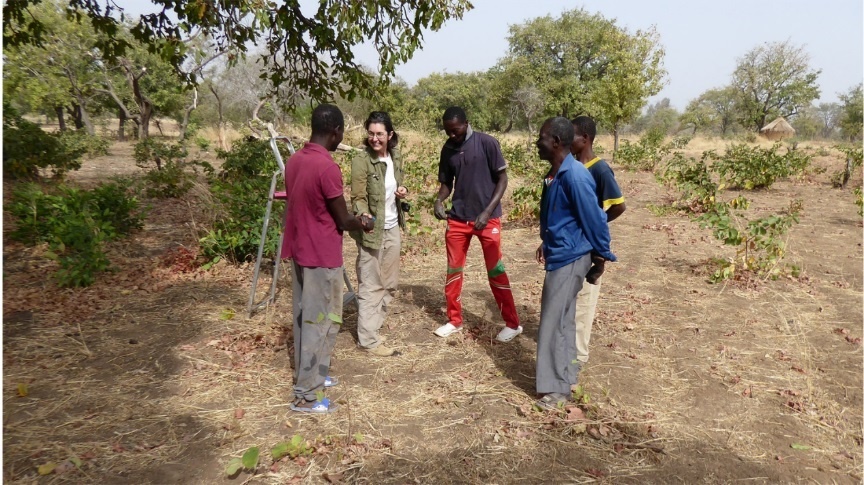 Perhaps unsurprisingly, a much greater proportion of flowers with supplementary pollen bore fruit, confirming, and demonstrating to local communities, that pollination is, indeed, limiting Shea yield. What is more, the higher diversity of other trees and shrubs at a site, the more insects visited flowers, and the less they were limited by pollination. Diverse sites are likely to support more insects because, for example, they provide more diverse floral resources over a longer time and more nesting opportunities.

The study leads to clear recommendations that when areas are cleared for cultivation, shrubs and trees that are beneficial to the local pollinators should be retained. Not only will this increase Shea yield but it may help combat desertification, in an area extremely vulnerable to the impact of climate change, and provide vital habitat for many of Europe’s summer migrant birds that winter or stop over in the Shea zone.

Already, BirdLife International and their partner Naturama are working to change the way Shea is managed using simple, low cost changes like natural regeneration, planting of native trees and shrubs, replacing agrochemicals with locally produced mulch and compost; and introducing apiculture for pollination and food / income.

RSPB and Naturama have carried out baseline surveys of birds in the study area and we hope to return in future years assess if, and how, these changes are reflected in the resident and migrant bird community. Together, the team has produced biodiversity guidelines for Parkland Management that have been adopted by the Global Shea Alliance, a 500-strong member organisation, which aims to increase sustainability across the shea value chain and in the food and cosmetic industries.

The work was funded by a Darwin Initiative grant and involved an international team from Trinity College Dublin and INGOs, BirdLife International and the RSPB. The work was conducted with local farmers, NGOs and academics in Burkina Faso, West Africa.